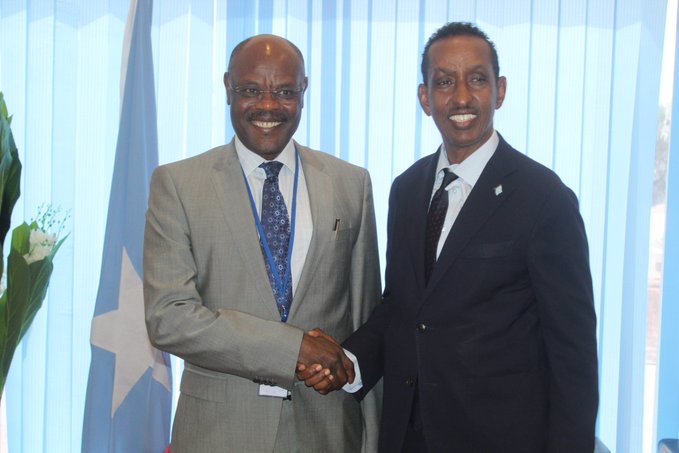 The two diplomats discussed ways to strengthen efforts aimed at effective cooperation and institutional support to raise the level of humanitarian aid and development programs between the Federal Government of Somalia and the United Nations Assistance Mission in Somalia (UNSOM).

Ambassador Awad and Mr. Abdelmoula meeting follow after the visit of UN Secretary-General’s Special Envoy for the Horn of Africa, Parfait Onanga-Anyanga in the country two days ago.

Parfait Onanga-Anyanga met a range of national and international actors and discussed regional security, elections, development, humanitarian and other issues.

He also spoke with representatives of Somali civil society organizations, highlighting the importance of inclusive political participation and the meaningful role that women and the youth play in the process while holding discussions with diplomatic representatives of countries from the Horn of Africa and the Red Sea regions, alongside other ambassadors from Somalia’s international partners.

One killed, two others injured in al-Shabaab attack on Bosaso jail – police

One killed, two others injured in al-Shabaab attack on Bosaso jail...

20 migrants drown after forced off boat by smugglers off Djibouti...